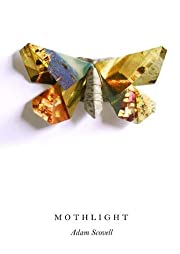 Mothlight is Adam Scovell‘s first novel and it’s pleasingly weird. It concerns the memories held by a young man of a woman he met in childhood. Later, their lives become further entwined through a shared profession and the young man becoming the woman’s carer. Walking in the landscape of North Wales is an important part of the lives of both protagonists, forming a self-referential connection between them.

The woman, Phyllis Ewans, is a lepidopterist, overlooked by her male dominated profession because she is a woman. The young man, Thomas, also researches moths. He comes to believe that Phyllis has possessed him and is haunted by her both before and after her death.

Mothlight begins with Thomas as a child, visiting Phyllis and her sister Billie in their capacity as customers of his grandfather. Thomas’s grandfather was a door-to-door supplier of household products and on a visit with him to the sisters’ house, Thomas is struck by the dust that covers every surface and connects it to the disintegrating scales of the moths mounted and displayed on every wall. It’s an encounter that sets in train Thomas’s future life. At first Billie leads the charge to capture Thomas’s attention, passing him money and tempting him with photographs of her glamorous youth, but it is Phyllis’s collection of books about moths that wins.

Photographs are an important part of this novel. They appear within the text, referenced therein, but the detail referred to sometimes difficult to make out because the images are printed in contrast-heavy monochrome at a small scale. They are snapshots from a life. The author’s acknowledgements credit them to the real Phyllis, a gift to Scovell that influenced the way in which he writes fiction. In the novel they are sometimes false markers, presenting a moment that is a fraction of the truth, and sometimes not truth at all.

There is a mystery at the heart of the sisters’ fractured relationship, something that Billie apologised to Phyllis for once in Thomas’s unobserved presence, a moment that Phyllis later denies. As Billie grows ill and Phyllis neglects her care, and when Billie eventually dies, with Phyllis leaving everything around Billie’s death arrangements to Thomas’s grandparents, Thomas does not share their disdain for Phyllis. Instead his fascination for this cold woman wrapped up in her research grows stronger, to the point of obsession. After Billie’s funeral, at which he hallucinates that the soil being thrown onto the coffin in the grave is a swirl of moths, Thomas makes his decision.

Billie had been buried, whether under dead wings or soil, and I knew that I was to follow the trail of these wings after her sister; following blindly towards the light if only to uncover the reason for her character. This was the curiosity she had imbued in me with parasitic precision.

With this, the novel moves into an exploration of loneliness, difference, introversion and obsession. It documents a descent into madness. Thomas becomes fixated on Phyllis, whom he refers to in life as Miss Ewans, as though in adoration. There is a Miss Haversham quality to the unwitting hold she has over Thomas, whose every step through life refers back to Phyllis.

There are moments, in the years when he is not in contact with her, that Thomas somehow slips through a gap in reality to enter a hallucination of a scene Phyllis once photographed, but seemingly, if we can trust Thomas’s account, before he has ever seen the photograph. Thomas begins to believe that these moments show that he and Phyllis are the same person; he begins to dissociate from his own individuality. The description of this mental breakdown made me think of Gilderoy’s decline in the film Berberian Sound Studio.

There’s an eligiac formality to Thomas’s narration that made me think of Henry James, or Susan Hill’s narrator in The Woman in Black. It’s a reticence to go into detail, in order to build tension, describing just enough of the strangeness to leave an element of doubt in the reader’s mind.

The doubt is exacerbated by the way Phyllis, when she and Thomas reconnect in London, lies habitually about her past, even when Thomas finds evidence of the truth. Her mendacity somehow infects the reader’s ability to trust Thomas’s truthfulness. There were times when I wondered whether Phyllis actually existed or was a figment of Thomas’s imagination, so particular is his obsession with her.

Despite growing closer to Phyllis in terms of visiting her, taking her on trips to see moths in the wild, and ultimately becoming her carer, she remains a mystery to Thomas. Some of the visits are to places Thomas knows that Phyllis has also visited in her past, but she either denies it or is non-commital in her reaction to being back there.

Phyllis dies and leaves everything to Thomas, who then neglects his work even further to clear her house. It is in doing this that he uncovers subtle and not so subtle clues to Phyllis’s secret, through photographs hidden in books and one other item secreted in a specific place that I won’t spoil by revealing. In searching the house for further information to help him make sense of these discoveries, Thomas takes drastic action to free himself from the sense that Phyllis has possessed him. It leads him to a place of potential answers, but ultimately leaves him still trapped with the possession of Phyllis’s memories.

For the reader, another loneliness is revealed in the final pages of the book – the loneliness of a love that wasn’t accepted at the time it was felt. For most of the book, Thomas has been the focus, and Phyllis seen from his perspective. Suddenly, we are presented with a different perspective and she becomes human.

I didn’t know what to expect from this book. Reading it was quietly thrilling as its strange events unfolded. I have another of Scovell’s books in my To Read pile and am already looking forward to reading it.