I’m starting my Euro Tour in Sweden with Lina Wolff’s The Polyglot Lovers. I read Wolff’s first novel, Bret Easton Ellis and the Other Dogs, not so long ago and have intended to read her second for a while. Wolff is Swedish, from Lund in Skåne. She lived in Spain for a while, where her first novel and some of the stories in her first collection, Many People Die Like You, are set. The Polyglot Lovers is set in Sweden and Italy.

I’ve never visited Sweden, but I have two friends from there. One hosts a Midsommar party every year (not during the pandemic, though), which is where I met the other. This newer friend designs tableware inspired by her Swedish childhood. I bought a set of placemats and coasters from her Ekotemplet range, which is based on the 18th century summer dining room built for King Gustav III. Known as the Echo Temple, the building is in Haga Park in Stockholm and was designed by the architect Carl Christoffer Gjörwell the younger. 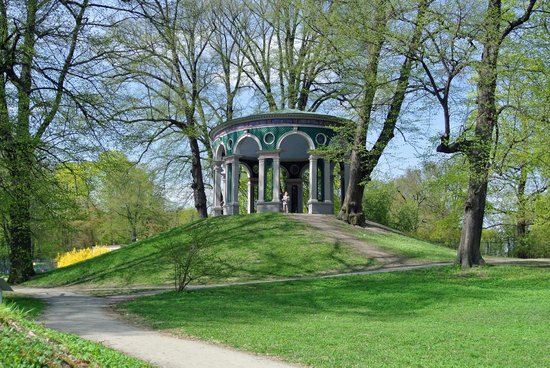 Isn’t that a beautiful building? I’d love to visit one day.

For now, though, I’m in Skåne, a part of Sweden I’m familiar with in a literary sense through Henning Mankell’s Wallander novels. Skåne is in the far south of Sweden, home to Malmö, Wallander’s stomping ground of Ystad, and the Öresund bridge that connects Sweden and Denmark.

The Polyglot Lovers is a book in three parts and concerns three people who are looking for love in one form or another, two of them unable to let go of a love they have lost, the third seeking vengeance for a love lost by someone else. It is a loop, a Moebius strip that turns back on itself while travelling forwards, circling a manuscript. This manuscript is allegedly a significant work, something that encapsulates the impossibility of the male attempt to understand and inhabit the female psyche.

As with Bret Easton Ellis and the Other Dogs, The Polyglot Lovers is chock full of cynicism, casting a withering eye over the male ego. Wolff’s prose as translated by Saskia Vogel is taut and spare. I imagine the original is, too. It’s a smart and unsentimental novel. It’s also mordantly funny and quickly became a book I actively wanted to read, something that hasn’t happened for a while, during the pandemic times we’re still living in. There was a morning bus ride into work where I almost missed my stop, I was so absorbed by the story.

Ellinor is from Skåne. She’s 36 years old, a skilled fighter and, after a string of less than adequate boyfriends, is giving online dating a go, in order to not be alone. She meets Ruben, a book reviewer in possession of a unique manuscript – the only copy of a novel by Max Lamas. Max is a writer who wants to be truly understood by one woman, someone who could be his polyglot lover. It’s a desire that takes him to Italy where he meets a down-on-her-luck marchesa. The final narrator, Lucrezia, is the granddaughter of this Italian marchesa, and is fixated on Max and the impact his behaviour has had on her life.

Interwoven with her online dating adventures, Ellinor introduces us to some of her previous boyfriends. She loses her virginity to her school sweetheart, Johnny, who is no sweetheart at all, teaching her to fight and hunt, and a man who is turned on by blood and turned off by weight gain. Johnny is the one she can’t forget. In adulthood, she dates a Dane called Klaus, whose small flaw is his drinking. He drinks so much that he reeks, “like his body didn’t know what to do with all that poison and so had started to produce its own musty antidote.”

Improbable and surreal things happen to Ellinor that she takes in her stride. Like the phone sex work she did almost by accident, her client a celebrity chef who asks her to dominate him, and the discovery she makes about power over other people and how it feels to be a man. Or when Klaus’s neighbour insists that she helps her stop her daughter from killing herself, because Ellinor is “the only one who’s free around this time.” It’s an encounter that ends up clarifying for Ellinor how she feels about Klaus.

The online dating passages made me laugh with the memory of my own foray into that world. First I joined Sarah Beeny’s site My Single Friend, where a friend writes your profile in the hope that all the good things they like about you will win over a potential life partner. I left quite quickly. My most memorable response was from a man with a Nigella Lawson fetish who had decided that I looked enough like Nigella in my photo (I don’t, but I had dark hair at the time) to send me a pervy message. I moved to the Guardian Soul Mates site, where I had some nice chats with commitment shy men looking for an impossible ideal, and an encounter with a divorced man who kept pestering me as soon as I agreed to exchange numbers and left me a voicemail saying he wasn’t an axe murderer when I told him I didn’t think he was right for me. Happily, I also met the man who’s now my husband.

Ellinor does her fair share of blocking psychopaths and ignoring dick pics, as well as coaching an inexperienced young man in how to get further than hello with a woman, before she meets Ruben. In a metaphor for what follows, she travels from Skåne to Stockholm to meet him ahead of a gathering storm that is due to roll up and over the country from the south, disrupting everything.

In the midst of her near non-existence as an installation in Ruben’s house, an encounter with Ruben’s blind wife Mildred gains Ellinor some perspective on Ruben and their strange period of co-habiting. Ruben treats her like a sex toy, there for his convenience and satisfaction, not a person to get to know or to love. Mildred helps Ellinor make sense of why this is. The lead up to Mildred’s appearance at Ruben’s house made me think of The Telephone Woman and Creta Kano in Haruki Murakami‘s The Wind-up Bird Chronicle. An unknown person makes silent phone calls to the house while Ruben is at work, and shortly afterwards Mildred arrives. It’s an easy connection to make when you don’t have all the facts to hand and don’t know that you’re following a loop.

Mildred is the connecting point between Ruben and Max. Max’s section of the novel is a wicked pastiche by Wolff of the way some male authors express themselves. As a character, he reminded me of a man I once knew, small in stature and in spirit, large in ego, with a penchant for cruelty. Mildred skewers him on their first meeting, consigning him to the ranks of male writers who claim higher things for what boils down to “… just writing about men. Men and sex.” Wolff has Max skewer himself in every thought and interaction.

Max is a polyglot, half Spanish, half Italian, raised in Sweden and a resident of various countries. He is financially supported by his wife, and is ashamed of who she is and what she does, in comparison to the wives of his fellow writers. His representation of their marriage and his wife’s distance from him made me wonder why she was with him. But of course I will never know that because Max doesn’t question it. Max is on a quest to find a polyglot lover, a woman who can satisfy him in any language. As a veteran of 15 extramarital liaisons, it’s no surprise when he picks up a 16th woman on a frustrated whim, with unexpected consequences.

This woman inadvertently introduces him to his next dalliance, via the pages of a magazine. Lucrezia Latini Orsi relates the unedifying tale from her two-room apartment in Rome, setting out Max’s part in the decline of her family.

Lucrezia introduces her grandmother as a key figure in her childhood, a woman with a title and a palace, a woman disappointed in her daughter and aware that her granddaughter takes more after her mother than her mathematician father. The grandmother has two pieces of advice that she offers up to women: to love their bodies and treat them with respect because a woman’s body is her most powerful tool for surviving a world made by men; and to embrace language as a means of becoming free from the shackles placed on them by men.

The marchesa and her daughter are regulars in the pages of unnamed weekly magazines, such as the one Max reads in a convention centre in Stockholm. I imagined something along the lines of Hello!, with its pages of minor royals and oligarchs. It is his reading of the magazine that takes Max to the Latinis’ country estate in Mogliano.

Max enters the Latinis’ world fleeing the consequence of his 16th dalliance, something he calls The Event, under the guise of writing a feature about the marchesa. He becomes interested in Lucrezia’s other grandmother, the working woman from Cassino in the south of Italy, whom Lucrezia contrasts vividly with her titled grandmother. I liked Camilla Agostini, she seemed more real than Marchesa Matilde Latini.

Lucrezia’s mother arrives from the ‘rest home’ where she lives to challenge Max about his intentions. The newspaper feature has turned into the manuscript called The Polyglot Lovers, the reading of which by the Latini women reveals Max’s true intent and results in a devastating loss for each person involved.

I thought this was a clever book and enjoyed the layering of the events in the overall story to create the literary intrigue. The device of using three of the players in the story to describe the events around the manuscript’s existence opens up a range of viewpoints that, by the end, have joined to make the whole. Wolff’s cast of characters are, to an extent, extremes but they are believable in their extremity. In two of its supporting characters, Mildred and Max’s unnamed wife, Wolff demontrates that behind every egotistical, mediocre man is an intelligent and resourceful woman who can not only manage her own life successfully, but keep that of a man afloat, too. In Claudia Latini Orsi, a woman who appears briefly but with impact, Wolff provides an alternative reading of the hysterical madwoman trope. Claudia made me think both of the women locked away by men in asylums in the past because their response to life was deemed intemperate, and of women like the artist Yayoi Kusama, who choose to spend time in mental health institutions. Her heightened emotional response to Max’s presence in her mother’s life has purpose, revealing the truth of Max’s duplicity and demonstrating how compelling men like Max find what they perceive as madness in women.

Ultimately, through Max and Lucrezia, Wolff shows that, even when a person is convinced that they have grown and changed for the better, they haven’t learnt anything. There’s a heavy and drooping inevitably about the final page.

What a great read for the first location in my literary tour of Europe. I’m hopping on a boat across the Baltic to Lithuania next.

7 thoughts on “The Polyglot Lovers”