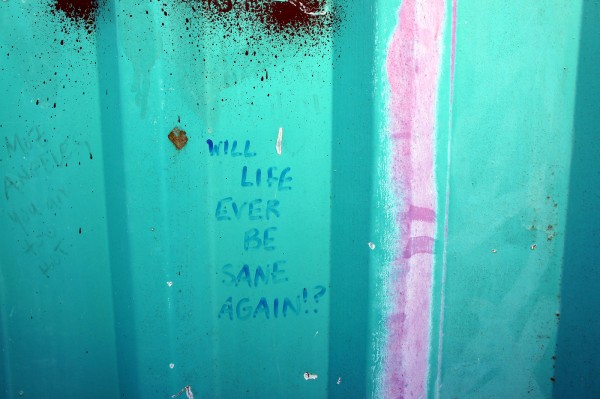 Oh, hello again. It seems that we’re back where we were, and I am filled with ennui. Ennui is a word I’ve misused in the past to mean boredom. Thank you, Lockdown, for teaching me its true meaning.

I don’t feel like I’d truly left lockdown in December, what with living in Manchester, where our metropolitan mayor’s attempt to do right by people got us punished by the infantile Westminster cabal, placed into a souped up Tier 3 that was lockdown in all but name. This current national lockdown doesn’t mark any real change. Listless and dissatisfied, I spend days at work struggling to motivate myself and weekends struggling to remember what normal human existence is. It isn’t normal to separate ourselves from friends and family, to have to carry letters with us that provide evidence that we are travelling to or from work on essential business, to live almost the entirety of our lives within one set of walls, to feel a constant wariness of catching a virus that will either do very little to us, leave us debilitated, or kill us.

January is a tough month even without a lockdown. The greyness seems to stretch on forever. There are no spangles bedecking the house to distract me. There is little sign of life in the garden. The weather is frequently leaden. This January, barely two weeks old, has all of that compounded by the preceding 10 months of restricted existence. I watch the greyness through the window in the spare room, where I’ve set up my home office, wondering if I will ever be in the same room as my colleagues during the working day ever again.

Laughably, I’ve been reviewing and rescoping forward plans at work. I watched an interview with a musician I like the other day, talking about the release of a new album and the possibility of a tour. This musician said that you have to plan, you have to book things in, so that you’re ready for when the restrictions end. Doesn’t that sound optimistic? I wrote a work plan for the next two years, unconvinced that the world is going to tilt on its axis again enough for me to put the plan into action. I wrote it with the expectation that I will rewrite it again in two months, and then again in two more, and on and on and on.

The global shit show is really grinding me down. The insurrection at the US Capitol building in Washington DC at the start of the year was shocking but unsurprising. I call myself a realist, but in honesty I’m an optimist. I layer realism over my optimism in a futile attempt to head the inevitable disappointment off at the pass. I needed to be optimistic back in November, though. There was already too much misery to pile on top the realism of 45’s inevitable refusal to accept anything that goes against the alternative universe he has built for himself, in which he is always right and those who are against him the thieves, robbers, bullies, not him. Abusers can always find justification for their actions. And yet, here we are, with the USA possibly on the verge of a civil war.

So that’s a cheery thing to look forward to.

In the three months since I last deposited some thoughts about *gestures vaguely* All Of This, I read some great books, all of which distracted me somewhat from *gestures less vaguely* All Of This. I finished my last book of the year two days before Xmas. I started my current book full of intent that I would burrow into it over the festive break, since we couldn’t go anywhere. It’s a 1,243 page epic. I thought I might read it in a week. Three and a half weeks later, I’m 723 pages in. I read barely 100 pages over the holidays. Xmas and New Year was mostly spent sleeping or watching box sets or films. I don’t know. Maybe it was my turn to experience what other people have struggled with throughout the pandemic so far. I’d been ticking along steadily, not reading quite as much because of the loss of my commute, but not experiencing that lack of concentration that other readers have spoken about.

I’m enjoying the epic very much and, when I’m reading it, I’m fully immersed in it. I am experiencing a reluctance to pick the book up, though. This month in particular, I feel as though my brain has switched off and making the effort to do something other than stare at a screen is too much, despite knowing that once I start the doing, I’ll be engaged again.

My distracted brain has been looking back to times in my life that feel long distant. Meeting up with friends and having wide ranging and amusing conversations seems a lifetime ago, when it’s less than a year. I miss feeling interesting. Going on holiday, too. I sometimes feel as though I can’t remember the last time I went away on holiday (it was November 2019, but feels much longer ago). I find myself yearning for my 30s, which is the last period of my life when I enjoyed going out to gigs and clubs and dancing in a room full of other people. Pre-pandemic, I was definitely over the whole socialising in loud, sweaty places with no seating, where you can’t hear yourself think and all you can do is lose yourself in the moment. The moment wasn’t doing it for me (mind you, for most of my 40s I had my mum’s prolonged decline to deal with and very few moments did it for me). Last Friday, I finished work half an hour early and had a mini disco in the front room. Just me and a Spotify playlist. It cheered me up, so it can’t be tragic, right?

Today, sick of feeling like a slug looks and worried about how bad my arthritis is getting because of my unwillingness to exercise for the sake of it, I followed a Joe Wicks exercise routine. A 15 minute set of repetitions for beginners who want to improve their fitness. After the first set of repetitions, my lungs felt like they were on fire. After the second set, my leg muscles felt like the fire in my lungs had spread. After the third set, I wanted to lie down and never get up again. But I did it. And once I could breathe again, I felt good. So good that I’ve decided to do the routine every day for a week.

I’ve said something there, to myself by way of you, that has explained my mood. Everything I do feels like it’s for the sake of it, without tangible purpose, done because there’s nothing else to do. There’s no expectation at the moment. It’s as though I’ve become an existentialist, whether I like it or not. What meaning does the world have, now? And why is it so important to me that I find meaning? The epic I’m reading is set in a different country, in a much earlier century. I expected it to be a good old romp, entertaining rather than thought provoking, but I find myself winkling out parallels even in this tale of feudal warfare.

“Will life ever be sane again?” asks The Smiths lyric in the picture in the header to this post. “Will life ever have meaning again?” is what I really want to know.