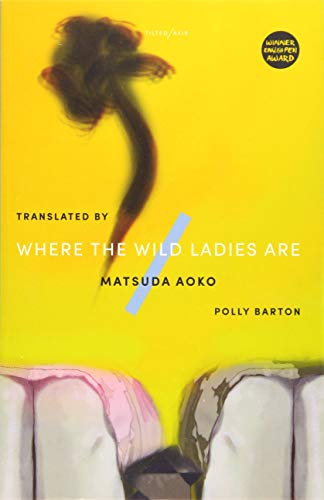 Where the Wild Ladies Are, Matsuda Aoko’s collection of short stories, translated into English by Polly Barton, is a reimagining of different traditional Japanese folk tales as told in kabuki plays and the comedic tradition of rakugo. Matsuda introduces a feminist slant to the stories, which I enjoyed.

Many of the originals are Japanese yōkai/ghost stories, in which the ghosts are often women seeking revenge against the men who murdered them, or raped them, or abandoned them to societal shame. They are monsters, preying on men who are depicted as only doing what men do, and therefore undeserving of the women’s revenge. Matsuda’s stories move the setting into the 21st century and give the women a different kind of power. Many of the principal characters reflect on how male-centric Japanese society is, and choose different ways to express themselves as strong women. Other characters lean into the prevailing prejudice for an easy life. Often there is criticism of unwomanly behaviour, as in the cases of the schoolgirl who outperforms the boys at school and the young mother who leaves her husband and works as a ‘night worker’ to support herself and her child. I felt that Matsuda was advocating for a real change of perspective around the position of women in Japanese society.

You don’t need the context of the originals to enjoy this collection. For those who are curious, though, there’s a list of the source stories at the back of the book. Some of the stories are also prefaced with an explanation of the original tale they are based on, while others include something in the narrative that sets the context for the retelling. With most you only have Matsuda’s retelling. I largely preferred that, as it meant I wasn’t distracted by trying to understand the stories in another context. These are new tellings for the present day.

One story that I did investigate the origin of is ‘Silently Burning’. The story on its own merits is one of my favourites in the collection. The narrator’s self-description intrigued me, causing me to wonder if she is neurodiverse. She is a travelling calligrapher who, from childhood, has found peace from “the blaring clatter of the outside world” through immersing herself in the art of creating beautiful handwriting. This possibility of neurodiversity in the narrator is, for me, another example of Matsuda being a writer who is pushing against the traditional social hierarchies in Japanese culture. The reason I explored the origin story, though, is because of a memory it triggered. The setting of Matsuda’s story is Enjoji temple in Tokyo, where Yaoya Oshichi fell in love with a temple page during a fire and decided that arson would be a good way to engineer another meeting with him. I was reminded of our honeymoon visit to the Yasaka Kaikan at Gion Corner. Here we watched a curated set of traditional Japanese performance arts, including the Bunraku ‘Datemusume Koi no Higanoko’, which tells Oshichi’s story.

The stories are funny and thought provoking, based as many of them are on rakugo, the Japanese entertainment in which a storyteller relates a long, usually comic, tale to his audience.

The opening story is about a salesman who is unemployed and not fully pulling his weight at home. He thinks he’s doing his wife a favour by carrying out a bit of light cleaning, and prefers to slob around watching daytime tv. Rather than his wife’s gentle nudges towards getting another job, it’s a visit from two women selling traditional peony lanterns, who have something strange about them, that spurs him to get off his backside and find work again.

The tale about the woman who ends her relationship because co-habiting drains her energy and then catches a skeleton on a fishing trip, opening up a new kind of relationship, is very funny. It subverts the traditional narrative of female ghosts moving in with men and ruining their lives. The same sex relationship in Matsuda’s retelling of the rakugo Honetsu is a happy and fulfilling one for both narrator and ghost.

Another story, ‘Smartening Up’, reflects on the beauty industry in Japan, with its focus on the pursuit of hairlessness. The main character’s aunt, wronged by the man she had been mistress to for three decades, pays her niece a visit and criticises her for the way her addiction to depilation has removed her power. The nameless narrator’s internalised rage finds a surprising outlet.

That sense of rage is shared by other women in these stories. The expression of female rage is something universally deemed unacceptable. Women are conditioned to be quiet, unassuming, peacekeepers. When we show anger, or any ‘negative’ emotion, we are branded harridans, harpies, she-devils or fishwives. But rage is a human quality, and women are human, so why shouldn’t we be allowed to express it? Or if we’re not allowed, why are men permitted and applauded for their rage? Some of the angry women in Matsuda’s stories reminded me of Nora Eldridge in Claire Massud’s The Woman Upstairs.

The aunt in ‘Smartening Up’ reappears in the title story of the collection, which takes its name from Maurice Sendak’s Where the Wild Things Are. Coincidentally, two of the books in my selection for the May 2021 Six Degrees of Separation meme are Sendak books. I wonder whether his being on my mind influenced me to choose Matsuda’s book for my next read. The title story is from the perspective of the aunt’s son, the cousin of the narrator in ‘Smartening Up’, and the appearance of Sendak’s book is a clue to the way that narrator’s inner rage manifests.

‘Smartening Up’ and ‘Where the Wild Ladies Are’ aren’t the only linked stories. There’s a central thread to the collection that gradually reveals itself through the connections that exist between the supernatural and the present realms. The reader encounters familiar names and situations unexpectedly across the stories. Nothing is spelled out, but there is a logic to the supernatural in Matsuda’s hands.

Another of my favourite stories mentions osmanthus, the sweet olive tree also known as devilwood and kinmokusei (きんもくせい/金木犀) in Japanese. This brought back a memory of visiting Hyogo Daibutsu near Kobe, and walking past hedges of osmanthus, slightly intoxicated by its scent. Matsuda is from Hyogo and must have grown up surrounded by the fragrance of this shrub. The story looks at grief, and how different people approach it. The main character made me laugh with her choice of which spirit she would summon back, using the special incense sticks she finds in her father’s bedroom. I’m very much a believer in there not being a heaven, that once a person is gone, they are gone, and all that remains is what the people who loved them remember of them. That said, I like the Japanese notion of a spirit world. It’s so much less sentimental than the one British people, at least, tend to believe in.

My absolute favourite story in the book tickled the squidgy bit of me that loves love in that heart sighing way when two people meant to be together get together. Based on a legend from samurai times, ‘The Missing One’ sees introvert shopkeeper Kikue exorcise her past thanks to a plate that’s missed off an order. I loved it not just for the straightforwardness of two well suited people finding each other, but also for the depiction of Himeji, famous for its castle, as a place with an alternative tourist attraction in its defunct 1960s monorail. I love the grand gesture architecture of the Modernist period, meant to represent a forward looking future but often delivering white elephants. The story made me want to visit Himeji and explore the suburbs, rather than head for the castle.

This was a great collection of stories, funny and thoughtful, that lifted me out of the bleakness I was feeling after my last read. I’d love to read more by Matsuda.

13 thoughts on “Where the Wild Ladies Are”