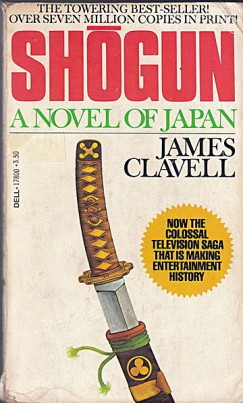 James Clavell’s Shōgun was published in 1975. Five years later, it was adapted into a television mini-series starring Richard Chamberlain, which I was allowed to stay up past bedtime to watch. Ten years after that, the novel reached 15 million sales worldwide. It’s a true blockbuster novel. I hadn’t read the book until my friend Lisa lent me her copy, a well-read 1982 edition she picked up on the pound shelf at the local superstore. When I started reading it, it felt like pure escapism. There came a point, though, during my reading, when real world events made me reflect on the way human nature doesn’t change, our political systems behind their veneers of democracy are still feudal at heart, and to live through interesting times makes you fodder for future historical fiction. Shōgun is still a cracking yarn, though.

Somehow, reading this spine cracked copy with its yellowing, frayed edged pages, softened by touch and the breakdown of the woodpulp fibres, seemed fitting for a story set in the first year of the 17th century. The crumbling structure of the book had echoes of a weatherbeaten almanac, or the secret rutter used by John Blackthorne to navigate the Magellan Straits at the start of the novel.

I enjoyed Clavell’s writing style. It immediately plunged me into the salty and mortal world of the seafarer, before carrying me onto shore and Blackthorne’s entry into Japanese society.

As with many things from a different era, even one less than fifty years ago, that portray Westerners encountering unfamiliar cultures, there is racist language to contend with. One of the Dutch sailors with whom Blackthorne works throws a racist pejorative into their conversation. The chosen term is anachronistic, from the early twentieth century, retrofitted to the 17th century. From my 21st century purview, it leapt from the page as a shock. Other language is milder but no less prejudiced against the Japanese, who are largely viewed by the Westerners as animals.

I enjoyed the humour of Blackthorne not understanding at first that ‘onna’ (おんな/女) means woman and isn’t a person’s name, and other confusions and frustrations that stem from his lack of knowledge of the Japanese language and culture. As a character, Blackthorne is open to new experiences, though, and is already fluent in Portuguese and Dutch, so it’s no surprise that he eventually learns Japanese, too. I wished that Clavell’s grasp of Japanese was better, though; surely, if you’re going to include another language in your book, you’d get someone who speaks it to check that you’ve got it right? And the spelling mistakes missed by the book’s copy editor, as ever, annoyed me.

The detail about Japanese feudal society under the leadership of the Taikō, daimyo and samurai is grounded in the three years of research Clavell carried out for the novel. Each of the main characters is based on a real person involved in the transformation of Japan under Tokugawa Ieyasu.

How accurate is it? Well, it’s a fiction, of course, so, on the one hand, not at all. Having said that, I read Marius Jansen’s book The Making of Modern Japan five years ago, which gave me a better understanding of the early modern history of this interesting country, and Clavell’s depiction of the Japan that existed at the end of the 16th century rings true enough, give or take literary licence. But what is basically an adventure novel needs the free imagination of the author to create excitement and intrigue, and to reimagine things like the influence of the Jesuits, the successful and open proselyting of some Japanese, and the level of tolerance among the Japanese warlords for the Portuguese. Clavell also introduces ninja to the story in a way that, having visited the Ninja Museum in Iga Ueno, didn’t feel quite right. But what’s truth when you can have exciting ninja action, eh?

I didn’t know much about Clavell, so read his Wikipedia page as a start in finding out more. His depiction of the Japanese is coloured by his experiences in Changi prisoner of war camp during the Second World War. And yet, Clavell doesn’t go all out in expressing his personal hatred of the Japanese in this novel. He applies some balance. Although he shows Yabu, the daimyo who captures the ‘barbarian’ sailors, as sadistic, and has Blackthorne question the morality of the society he finds himself in, he also explains the social structures at play through the behaviour of characters at all levels of society and provides context for the Japanese response to the arrival of Blackthorne and his crew, for example.

As befits a ripping yarn, there are larger than life characters, including a Portuguese pilot employed by the Jesuits, Vasco Rodrigues. He bursts into the story like Lord Flashheart in Blackadder II. Blackthorne himself, while not a full blown swashbuckler, is certainly buccaneering and a classic flawed hero, willing to do whatever it takes to survive but also willing to save an enemy because it’s the honourable thing to do. Yabu is a more scurrilous character, playing factions off against each other in his attempt to increase his personal power and become a kingpin in the winner’s regime.

Despite their acceptance of the almost godlike position occupied by samurai men and the restrictions placed on women’s involvement in society, the female characters are strong. Behind the façade of weak minded subservience, the key women in the story exert influence and are shown to have independent thought. The warlords they pay homage to consult with them and trust their judgement. A number of them are key to the plans of the Regent Toranaga to go against the Council of Regents, and his enemy Ishido in particular, and unify Japan under one ruler. It interested me, from the viewpoint of a society where women have more autonomy and some have achieved positions of power, that these strong women made use of manipulation and playing the role of the weak, compliant woman in order to change the position of the men who hold the power. It interested me because, to a certain extent, this is still something that women in the West feel they need to do, because the power structures of society haven’t yet changed enough to permit true equality. The male ego is a fragile thing. The women in this novel recognise it and use it to their advantage. It reminded me of the Marquise de Meurteuil in Les Liaisons Dangereuses.

The fact that Shōgun‘s setting is a time of war and political intrigue allows Clavell to ramp up the tension. There are exciting fight scenes, assassination attempts, and Machiavellian machinations. It all makes Shōgun an entertaining romp through an interesting moment in Japanese history.

The excitement exists because it’s fiction, but there’s reality at the back of it. Factions, feudal hierarchies, grabs for power, battles to retain power: I am regularly struck by how the past, even when fictionalised, is contiguous with the present. While I was reading Shōgun, a moment of crisis in Western society happened, one that has been accelerating to its inevitable denouement since 2016. There’s a battle two-thirds of the way into the book, and a monologue from a foreign observer of the battle and what it means for Western interest in Asia.

Rodrigues said, ‘You’ve told me a dozen times that once war starts it’ll go on forever. War’s started, hasn’t it? We’ve seen it start. That’s got to hurt trade. With Toranaga dead the war’s over and all our interests are safe. I say blow the ship to hell.’

Is it just because the 45th President and his political allies fomented insurrection on the day the US Presidential election results were ratified that I saw equivalences in this passage? Elsewhere, too, there are references to impeachment of Toranaga for going against the political code. Toranaga believes himself to have the best interests of the nation at the heart of his plan to take sole command, and has secret cadres of samurai hidden in the centres of each region, who are set “to explode simultaneously into revolt to create the chaos essential to the plan.” If what is happening in America wasn’t so frightening, these parallels would be interesting, because, despite Shōgunate Japan not being a democracy, the factions depicted in this novel stand for any opposing factions in any society, democratic or otherwise. I don’t mean to be glib. The fascism at the heart of the Trump administration has worried me since his election campaign rallies. The treatment of him as a joke to be tolerated, because a fascist coup couldn’t be possible in America enabled what happened on 6 January 2021. Watching how the political system in the US responded to the initial insurrection, I wondered whether we had seen a war start. A month on, with the second impeachment of 45 underway, I still wonder. There are powers outside the US who I’m sure would welcome a civil war, as long as it means the death of democracy. In three centuries’ time, will our present be the subject of historical fiction? Are we living in some future ‘interesting time’ in history?

The plotting of one samurai faction against the other and its depiction of Blackthorne as something distasteful but necessary to the acquisition of total power also chimed with the times we’re living in, for what has Trump been, what might he and his family continue to be, if not something outwardly distasteful but necessary to the Republicans in order to maintain power. The November election and the January Senate runoffs in Georgia seem to give hope that there are enough citizens in America to reject this corruption, but the insurrection on 6 January and the unwillingness of the Republicans to act quickly to remove Trump from office for his part in it suggest that more is to come. Let’s hope not.

I did not expect a fictional depiction of feudal Japan to chime so strongly with my 21st century times.

More generally, as a novel, the scope is ambitious and, although reasonably tightly plotted, there are longeurs and the occasional reliance on character dialogue to deliver exposition. Some of the exposition I thought Clavell could have kept to himself, as it provided more detail than the narrative needed. I was flagging by the last quarter of the book, wishing it was a couple of hundred pages shorter, convinced that it could have been.

Towards the end, some of Clavell’s decisions felt off to me. The bizarre personality change in Toranaga that confounds those who know him most intimately in particular felt far fetched, an unrealistic device from Clavell to twist his plot in the direction it needed to go. When Toranaga’s pretence is revealed, his closest confidantes are immediately unsurprised by his subterfuge. So why would they have been surprised in the first place? The plot changes that happen in rapid succession after this left me wishing I was at the end of the book with 200+ pages to go. It ended satisfactorily, though, with some loose ends tied up but others left loose, leaving me wondering what happened next to Blackthorne.