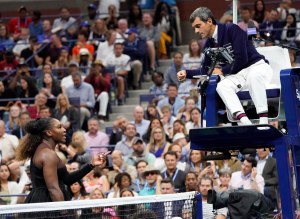 I read this article in the Washington Post this morning and it made me think about Serena Williams and what she represents in women’s tennis.

I’ve loved tennis from the moment I saw Bjorn Borg beat Jimmy Connors to win Wimbledon in 1977. From that moment on, I’d spend the summer holidays hitting a tennis ball against a wall at the back of the house, or going to the local park with my mum and my sister to play on the courts there. I always wanted to play tennis on the beach, dragging a stick through the sand to mark out the court. I played with enthusiasm but no skill at secondary school.

I like the ritual of tennis, the pattern of the games, the sets, the scoring. I like the combat and the gentility, that the players are passionate about the fight but also relish the politesse of the arena they fight in.

At times, there are players that I don’t appreciate because their passion crosses a line into petulance when things don’t go their way. Nick Kyrgios is an example. John McEnroe. Ilie Nastase. It’s mostly men, but sometimes it’s women too.

I get that at the back of their tantrums and on court bullying is a strong desire to be recognised as the best, and to win at all costs. The winning trumps their reputation as sportspeople.

There are also players whose thumping power play bores me. I like counter punchers and all court players. Baseline play often bores me. Serve and volley doesn’t really fill me with joy. I like to watch tennis, to see skill on display, not just brute strength and getting it over with quickly. I never liked Pete Sampras. I loved Bjorn Borg, Steffi Graf, Jimmy Connors, Arantxa Sanchez Vicario, Andre Agassi. I love Roger Federer, Aggie Radwanska, Jo-Wilfrid Tsonga, Petra Kvitova.

It took me a long time to warm to Serena Williams. Of the Williams sisters, I prefer Venus’s playing style. For a long time I found Serena to be brattish, aggressive, a bulldozer of a player. As time has gone on and she has matured, channelling her compelling desire to win into the game and letting less of it leak out into courtside outbursts and baseline racquet abuse, I’ve grown to respect her as a player. And who could fail to admire the way she has come back to the game after pregnancy and childbirth? She is a great role model for young women. She demonstrates that it’s okay for female players to be as focused, passionate and aggressive about winning as male players. She gets abuse from those who believe female players should be delicate little flowers with a certain body shape and feminine demeanor. She is a wonderful direct challenge to the male gaze that makes women’s tennis such a sexist paradise for commentators in the media and trolls on social media. She is, for my money, the greatest tennis player the world has seen so far.

Which is why her loss in the final of the US Open this weekend makes me sad. Sad for her, that a male umpire couldn’t take being challenged by a strong female player and decided to make an example of her, but also sad for Naomi Osaka whose first grand slam win has been overshadowed by Carlos Ramos inserting himself into the game unnecessarily. Ramos has form for strict adherence to the playing code, frequently issuing warnings to top players for time violations, coaching and being verbally abusive on court. Venus Williams, Andy Murray, Novak Djokovic, Rafael Nadal and Nick Kyrgios have all been on the receiving end of Ramos being a stickler for the rules. There’s an argument that Williams should have been aware of that and been more careful around the edges of her game, but I think that’s bullshit.

I also think that the hyperbolic reporting that describes Williams’s reaction as a meltdown is also bullshit. She was angry, she challenged the umpire, she got on with the match. A meltdown would have involved flinging herself to the floor, or storming off court, behaving like a toddler who hasn’t learnt to control her emotions. But hey, papers and online articles don’t sell themselves.

As Sally Jenkins says in that WaPo article, part of an umpire’s job is to de-escalate heightened emotions on court, and Ramos neglected that role in favour of taking the greatest tennis player in the world down a peg or two.