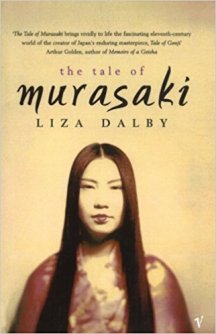 April’s starting book is Memoirs of a Geisha by Arthur Golden. I can go one of two ways with this chain. I could list six of my favourite books about Japanese life, but that would be too obvious. Instead I’m going to celebrate the joy of friends lending books.

I consider it a privilege when someone lends me a book. It’s something that they have enjoyed enough to want to share it with me, and that adds something to the reading experience.

Carole, with whom I used to work almost fifteen years ago, was a great lender of books. She lent me Memoirs of a Geisha because she knew that I was (am still) crazy about Japan.

She followed it up with a book by an American woman who went to work as a Geisha in order to understand the profession better while researching her anthropology PhD. The book that she lent me was The Tale of Murasaki.

In this imagining of the life of Murasaki Shikibu, author of The Tale of Genji, Dalby draws on the surviving fragments of Murasaki’s diaries and the different manuscript versions of her novel, as well as other contemporary writings like The Pillow Book of Sei Shonagon.

Carole also had a taste for historical fiction that explores the underbelly of society. She lent me Slammerkin.

Emma Donoghue’s novel is inspired by a true crime – the murder of a young woman in the Welsh Borders in 1793. The book is about Mary Saunders, a young woman so obsessed with fashion that she becomes a prostitute in order to afford the fabrics she lives. A slammerkin is a loose fitting dress. It also came to mean a loose woman.

Because I enjoyed Slammerkin, Carole then lent me Fingersmith.

Fingersmith is a historical novel set in Victorian England. It’s a tale of deception that twists and turns and leaves you wondering who the victim really is.

A book that both Carole and I borrowed from our mutual friend Cath was The Lovely Bones.

Alice Sebald’s novel deals with the harrowing subject of child rape. Fourteen year old Susie is raped and murdered by a neighbour. The book is about her looking down from heaven, trying to come to terms with her death while watching her family struggle to cope with what has happened. I found it too sentimental.

The Lovely Bones reminds me of The Time Traveller’s Wife, which my good friend Dip lent me. 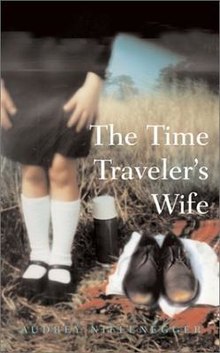 Although there are fundamental differences to their plots, there are some similarities. Henry, the titular Time Traveller, gets to watch and interact with his wife Clare throughout the different stages of her life, which makes for uncomfortable reading at times. The book also asks similar questions about the meaning of life and death to Sebald’s novel. It was another book that I found too sentimental. But that’s not to say that I didn’t enjoy it.

I find it difficult to lend books. I’ve had bad experiences of people not returning books I’ve lent out or returning them in a state that suggests lack of respect. I’m selective about who I lend to.

Where’s your chain going to take you? Who is a good source of book lends in your life? And who do you lend to most often?