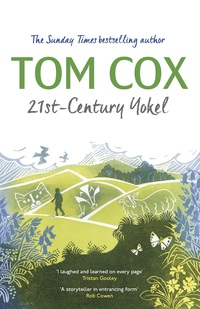 I’ve been reading Tom Cox’s nature writing for a while now, first through his columns in The Guardian and more recently via his website. He’s an interesting writer. He writes about nature in a way that makes sense to me. It’s difficult to describe, but it has to do with nature being entwined into life rather than held at bay and experienced for leisure. His writing style reminds me of W G Sebald. He’s whimsical without it being a pose.

I pledged for his latest book on Unbound. I haven’t read any of his other books, despite four of them being about his life with a clowder of cats and me being the sort of person who has to stop to say hello to any cat I encounter. 21st-Century Yokel, though, seemed the kind of book about nature, folklore, understanding the place where you live, walking, landscape, myth, and sheep cuddling that I’d been waiting for.

There is so much of the book that I want to quote, but I’ll control myself. First, though, some sheep cuddling.

… I set off on foot down to the river and in what seemed like no time at all was cuddling a large, docile ewe, a sheep I’d taken for a troublemaker the first time I’d seen her, waiting for me on the path above the Dart, but who it turned out just wanted to say hello and find out whether I needed anything.

I’ve never cuddled a sheep, other than Boris Pasturenak, my toy sheep that my mum bought me in a teashop in Corris, prompting a man in posh man pants and a cravat to tell us in great detail how sheep have ruined the Welsh landscape and if he had his way he’d kill the lot of them. Which was nice of him. I’d like to cuddle a sheep, but am reluctant to force my affection on one. I don’t like being cuddled by strangers. Why would a sheep be any different?

Much of 21st-Century Yokel is about Cox’s life in Devon. I have a complicated relationship with Devon. Bad Uncle (that’s not his official name, but I don’t want to offend people who read this and don’t know me by dropping the C-bomb so soon) lives in Devon. My first professional job as an archivist was in Devon. If I say that I lived in Plymouth for 16 months and 23 days, I’m sure you’ll get an idea of how much I enjoyed my time there. Plymouth was the first time I experienced depression, and the cure was to leave for Sheffield.

I tried to explore the countryside around Plymouth. I liked Dartmoor. I enjoyed driving around the narrow lanes that are punctuated by a mixture of chocolate box and sinister villages, both as part of my job and as something to do at the weekend. I popped over the border to Mount Edgcumbe (by which I mean scared myself to death in the little chugging ferry from Devonport) whenever friends came to stay. But when you’re depressed and feeling isolated because you’re called foreigner and looked at with suspicion when you speak, it’s hard to feel at home, no matter how lovely the landscape.

Reading about Cox’s experience as a newcomer to Devon, and the way he explored the local area on foot as a way of finding his place in it, made me envious of the way he was at ease in a way that I usually am in a new place but couldn’t manage in Devon. It also revealed to me the Devon I didn’t get chance to experience myself.

But it’s the nuggets of knowledge Cox shares in his meandering, non-linear approach to writing that make this book a true gem for me. I’ve always preferred primroses to daffodils as signifiers of spring. They are one of the first plants that I install in a garden when I move house, along with a rosebush. I love them for their softness, their lack of hubris. They make me think of a favourite aunt whose birthday was Primrose Day (a construct to commemorate Disraeli’s death, unfairly linking this custard coloured beauty with the Conservative Party), and who liked to wear that particularly creamy soft yellow somewhere in her attire. For Cox, the magic of them is that you never see them die. That hadn’t ever registered with me, but it’s true. As well as fading into the new growth that comes up around them, when the flowers disappear, what’s left looks like a new bud, and the leaves are lush and green for most of the year.

The way he writes about rivers captures their essence as living things with personalities. I love water, whether it’s a fast running river, a tranquil pond surrounded by rushes and irises, or the petrol blue endless sea off the west coast of Britain. My favourite walks are beside water. We’re lucky to have a section of the Bridgewater Canal running near our house. I take strolls at different times of the year to see how the wildlife is changing. There’s a heron, as well as the usual ducks and geese, and fishermen line the bank, so I assume there are also fish. The plant life is a mixture of thistles, evening primrose, wild snap dragons and the kinds of shrubs and bedding plants public bodies like to use to pretty up an area. Cox writes about the Dart, and the way it changes in appearance and activity along its length. It’s like being there with him.

After the fast stretch below Buckfastleigh the river widens and dozes for a few miles, even when it prevaricates most dramatically about its intentions, then hits Totnes and goes tidal with a dramatic seabird flurry. In the sludge beneath the main bridge over the water in the town there is typically at least one upturned shopping trolley. The muddled clangs of the business park drown out the sound of cormorants and greenshank. Close by are the railings, hooped barbed wire and graffiti of the long-abandoned former Dairy Crest site. But the river still has an old-fashioned way of feeding the mythology of the place. Even at its most urban it retains a wildness that has not quite been buried.

It’s the way Cox acknowledges the urban side of nature as being just as important as the rural that makes his writing enjoyable for me in a way other nature writers don’t. He talks about man’s intervention in the landscape as another way that our environment is shaped, not automatically condemning it as an invasion. This is how I feel about the Bridgewater. Built as an industrial transport route in the 18th century, its usefulness for moving freight was affected by the arrival of the railway in 1830. However, it continued to carry freight traffic between Liverpool and Manchester until the mid 1970s. Now, the section near us is a haven of wildlife at the back of Trafford Park industrial estate, the towpath frequented by cyclists, runners and walkers, and the waterway by pleasure craft. It’s a place to escape from the busy-ness of city living and one of my favourite places to clear my head in.

It’s not all nature writing, though. Cox is fascinated by folklore and traditions, perhaps none more so than the East Anglian way with a scarecrow. In Norfolk they’re known as Mawkins. According to the Collins English dictionary, mawkin is a variation of malkin, both pronounced the same and originally a diminutive for Maud, dating from the 13th century, which came to mean a slovenly woman and then a scarecrow. In Suffolk they are infinitely more macabre, often taking the simple form of dead crows nailed to pieces of wood. A Deliverance-style warning about what will happen if you dare to peck the crops, perhaps. The passage about Cox’s visit to the Hollywood Legends Diner off the A47 near Narborough (the Norfolk one) made me laugh out loud. The build up to it expands on the version in the original Guardian article, which includes a colour version of the image of the Marilyn Monroe mannequin reproduced in the book, by incorporating the branch of Louis Tussaud’s at Great Yarmouth alongside Sarah Hare’s wax effigy in a church cupboard. I’ve never been to Norfolk, but if I ever do make a visit, I’ll be sure to visit the diner.

Cox’s dad looms large, too. His speech is presented in block capitals which embodies not just the idea of volume but also his irrepressible engagement with life and his unwillingness to believe he might need to give life a bit of a breather from his enthusiasm sometimes. Someone who survives a broken back sustained after a fall from a tree he was pollarding and is back chopping wood and wading through ponds weeks later is worthy of celebration. I particularly like the quote from Tom’s mum.

“I should have known he would never be a proper grown-up when he asked me to go sledging on our first date.”

At the centre of the book is a chapter about Cox’s nan and their shared love for the sea. It’s an amalgam of two of my favourite articles on his website and deals with the nature of family, being an heir to intangible things, the way we celebrate life at the moment of its ending, and how the sea is so vast and unknowable that we can throw whatever we like of our feelings its way, safe in the knowledge that it doesn’t care. The way Cox writes about his nan’s life from childhood to nanhood is beautiful, and the way he describes the complicated feelings he experienced after her death is a piece of writing worth reading. I’d go so far as to say that this chapter alone is worth buying the book for.

Family is the subject of the last chapter of the book, too. The Cox side of the family this time, in particular Cox’s dad Mick and granddad Ted. This chapter marries nature writing, family history and local history with a personal exploration of why Cox himself can occasionally be a bit dozy. The setting is Nottinghamshire and its border with the Peak District. We used to have day trips to the Peak District when I was a child. My dad loved heading to Goyt Valley on the Derbyshire/Cheshire border, but my favourite was crossing the Snake Pass to Derwent Reservoir, where I named a cleared section of forest on a back road Dinosaur Land because the felled and abandoned tree trunks looked like dinosaurs to me. Cox describes an area of the Peak that is less familiar to me, but his recollection of it being a wild and intriguing destination saved for weekends was the same as mine.

My only sorrow about the book was that Cox’s photographs and the reproductions of his dad’s art are in black and white. I understand why. It keeps the printing costs down. Fortunately, Cox is on Instagram, so I can feed my yearning for colour there. That aside, it’s one of the best books I’ve read this year. If you’re already a reader of Cox’s website, then this volume adds to some of his existing pieces, and merges and reworks others. It’s also a more pleasant reading experience, having the heft of the book in your hand and feeling the pages as you turn them. If you’ve never read any Tom Cox books or articles before, then 21st-Century Yokel is a good place to start.

I’ve already pledged for his next book, which promises unsettling fiction formed from the experiences of living inside a ghost story that Cox describes in 21st-Century Yokel. I can’t wait!