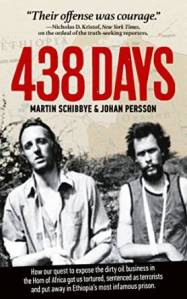 My friend Anna, who is Swedish, was reading this book and posted about how good it was on Instagram. She was reading it in Swedish, of course, so I was glad to learn it had been published in English.

438 Days (438 Dagar in Swedish) relates the experience of journalist Martin Schibbye and photographer Johan Persson as wrongly convicted prisoners in an Ethiopian gaol. Both men are extremely likeable, and very different characters. They set out to investigate the involvement of a Swedish oil company in a contested region of Ethiopia, entering the country illegally (as journalists often need to in order to investigate stories) with the assistance of the Liberation Front of the contested region. The Ethiopian government classifies the Liberation Front as a terrorist organisation, and charged Schibbye and Persson with terrorism. The book records their fight for freedom within a corrupt judicial system. The story is told in an open, honest and human way. I found it utterly compelling. It really underlines how important it is that the international press is free to investigate crimes against humanity, and political and economic corruption in all its forms.

That Schibbye and Persson maintained their sanity while a repressive regime flouted international law, abetted by the silence of UN member states, is testament to how grounded they are as people. The thing I like about this book is that it doesn’t set out to shock or sensationalise, and it doesn’t hide its truth in a sea of clever words or political analysis. It is a chronicle of the experience of two men and the people they encounter told in a really straightforward, accessible way. You don’t have to be ultra politically motivated to read it. You just have to be interested in the world around you. There is grimness in the book, of course, but there is also humour and beauty. It is utterly gripping.

Schibbye now heads up the Blank Spot Project, as a direct result of his experience in Ethiopia. When a fellow prisoner asked him to tell the world about conditions in Ethiopian prisons, he came up with a digital platform to deliver independent journalism free from the influence of newspaper editors who need to satisfy owners and shareholders and are often in someone else’s pocket politically. Schibbye and his fellow journalists aim to tell stories that don’t get picked up by the mainstream news media.